Flowers in shades of soft pink and white nestled amongst crystals and soft greenery created a very romantic atmosphere for this tented reception held at a private residence in Clarence, NY. 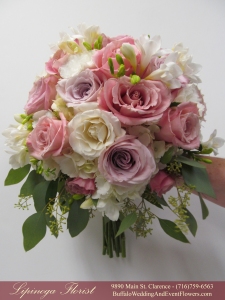 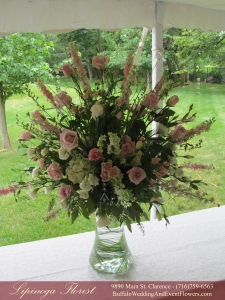 The Bridal Bouquet included a very feminine mix of pink and white roses, hydrangea, freesia and assorted greenery.  A double rose boutonniere was accented by greenery and wrapped in raffia.  A large vase arrangement with hanging crystals adorns a buffet table at the reception.

The Bridesmaids carried simpler versions of the bridal bouquet and flowers to coordinate with the romantic and feminine ambiance.

A long and low centerpiece adorned the head table, the soft and elegant flower combination was accented by more crystals and trailing grasses and greenery.

The guest dining tables at the reception had a beautiful centerpiece of soft and romantic flowers including roses, hydrangea and larkspur with branches with hanging crystals.

Tall pedestal vases allowed for the centerpieces to be raised into the air to allow guests to easily converse during their meal while also creating a beautiful dramatic statement against the soft white fabric of the tent.

Flowers accented every table at this event including the beautiful arrangement for cocktail hour shown above and even simple hydrangeas found throughout on accent tables such as the escort card table or s’mores station as shown below.

A tall cylinder vase raises a beautiful statement arrangement upon a buffet table at the reception.  A flower arrangement could be found upon every table creating a feeling of soft feminine ambiance.

A simple tent was transformed into a luxurious reception space through the use of beautiful flowers, exquisite tall vases, lush greenery and accents of hanging crystals. 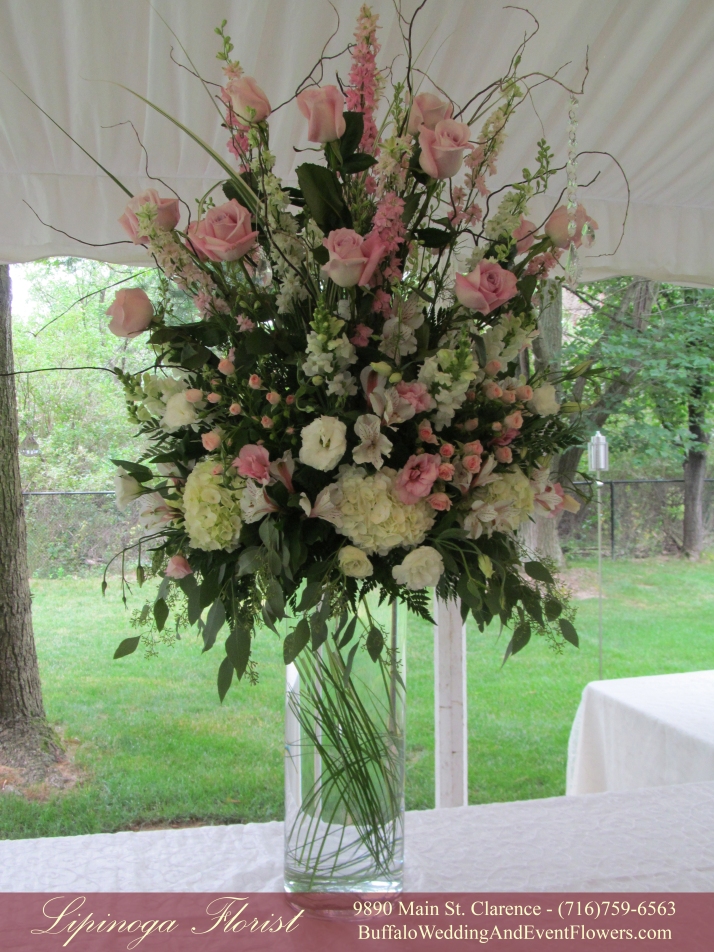